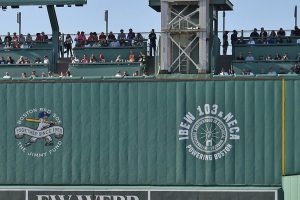 Boston, MA For many years, union electricians from the International Brotherhood of Electrical Workers (IBEW) Local 103 have been brightening historic Fenway Park by providing electrical services to the Boston Red Sox organization – including the operation and servicing of the lights that shine over the most historic park in Major League Baseball.

Now, IBEW  Local  103 members, along with the union contractors of the National Electrical Contractors Association (NECA), have forged a broader partnership with the Boston Red Sox that will help power a number of key charitable initiatives. The agreement makes the union and the contractors association partners of the Boston Red Sox. As part of the partnership, the IBEW Local  103/NECA emblem along with the tagline “Powering Boston” will  be emblazoned on Fenway Park’s historic Green Monster for the entirety of the 2018 and 2019 seasons.

IBEW  Local  103 includes more than 8,000 electricians and technicians. The Greater Boston Chapter of  the National Electrical  Contractors Association is  an employer association that includes dozens of companies who use IBEW  Local 103 labor to ensure the highest level of quality,  training,  safety,  and professionalism across the wide range of services they deliver. Together, the groups provide the highest quality  electrical, telecomm, security system, and medical life safety services in the region.

“IBEW  Local 103 and NECA play a key role in bringing light to Fenway Park throughout the season, and there is no bigger stage where reliable electrical services are needed more,” said Sam Kennedy, President and CEO of the Boston Red Sox. “We are thankful for their continuing service to Fenway Park, and are now very proud to call them partners of the Boston Red Sox.”

“IBEW Local 103 and NECA provide professional electrical construction services to the widest possible range of residential, commercial, and industrial customers, in addition to other key services like security, medical life safety, and more. We have always been extremely proud to count Fenway  Park and the Boston Red Sox as a customer,” said Lou Antonellis, Business Manager of IBEW Local 103. "They trust us with making sure the games can happen – and we are very proud to now count ourselves among their partners. Merging the efforts of two groups that already do so much charitable and neighborhood-based work will  be a major positive not just for our organizations, but for the entirety of Red Sox Nation and the communities that we serve.”

“The trust that the Red Sox put in our contractors and in IBEW  Local 103 members speaks volumes,” said Glenn Kingsbury,  Executive Manager of NECA’s Greater Boston chapter. “It says that if we are the first choice to help keep the lights on when millions are watching, then we are the right choice for any developer, business, or other kind of customer that wants innovative, reliable, and safe electrical construction work done on their project.”

As part of the partnership, IBEW Local 103 will serve as the presenting sponsor of the baseball equipment drive conducted by the Boston Red Sox to benefit Major League Baseball’s “Baseball Tomorrow Fund.” Members of the community will be able to drop off new or serviceable used baseball equipment at the IBEWLocal  103 Union Hall in Dorchester, MA and that equipment will  be donated or repurposed towards a range of organizations and baseball or softball leagues that provide access to the game for underserved youth and communities.

Furthermore, each time a Red Sox player successfully reaches base after hitting the IBEW Local 103 / NECA emblem on the Green Monster, IBEW Local 103 will donate Red Sox game tickets and $250 to local, charitable non-profits that provide resources and supportive programing to young people in the Greater Boston areas. Benefiting youth will be part of the Red Sox “Bullpen Buddies Night” initiative and will receive special recognitions and hospitality at the games they attend thanks to IBEW Local 103 / NECA.

The Red Sox and IBEW  Local 103 / NECA have also agreed as part of their joint charitable portfolio work collaboratively to promote and expand the “Helmets to Hardhats” program that helps  returning military  service  veterans find  rewarding,  family-sustaining  careers in  the construction trade industry.

As a service to fans at Fenway Park, IBEW  Local 103 / NECA will also provide new phone charging stations at various locations throughout the ballpark. IBEW 103 / NECA will serve as the presenting sponsor of the annual Babe Ruth coaches clinic and Fenway Park and a range of other community initiatives.  On June 22, 2018,IBEW  Local 103 / NECA and the Boston Red Sox will host a “Union Night” at Fenway Park with discounted tickets being made available to IBEW 103 members, NECA contractors, and their families.