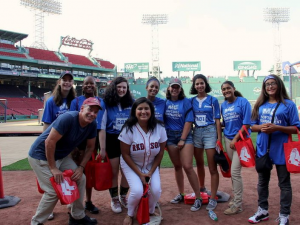 As part of the Bullpen Buddies charity initiative, sponsored by IBEW Local 103 and NECA, the young athletes from the community youth organization, ages 14-16, stood on Fenway's grounds to watch the Red Sox during batting practice.

The experience was particularly special and well-earned for the young women's softball team considering their own success on the diamond this season, placing second overall in this year's Mayor's Cup Softball Tournament.

Throughout the Red Sox batting practice, the Reagan League U16 athletes and their coaches, Jenny Huezo-Rosales and Harry Smith, were greeted at the bullpen by Red Sox. After getting autographs from Xander Bogaerts, Mookie Betts, J.D. Martinez and more, the U16 athletes then stayed to watch the Sox against the Miami Marlins.

IBEW Local 103 and NECA also provided each of the young women with IBEW Local 103 t-shirts, Red Sox hats, baseballs, and other Red Sox merchandise in a complimentary swag bag as part of the experience.

"Bullpen Buddies is a really special initiative, and we're proud to play a part in making such a positive, lasting memory for local youth," said Lou Antonellis, business manager of IBEW Local 103. "That's what this partnership with the Sox is all about: working together for our community."

"There really isn't a better reward for the hard work these young women put into this season than to meet some of their favorite players and role models on the field at Fenway Park," said Reagan Youth League U16 coach, Harry Smith. "We can't thank IBEW and NECA enough for choosing our organization for what was really a special experience for our team."