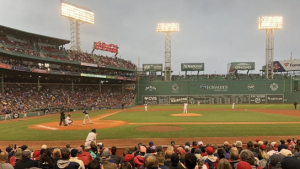 While IBEW Local No. 103 (Dorchester, Mass.) and NECA's Boston Chapter (West Newton, Mass.) have provided electrical services for the Boston Red Sox organization for many years, including the operation and servicing of the lights in Fenway Park, that partnership took a significant step forward recently when the organizations teamed up to sponsor a number of charitable programs.

One of the most visual aspects of the new partnership is the IBEW Local No. 103/NECA emblem that is now on the park's Green Monster wall, with the words "Powering Boston." The emblem is more than just for publicity, though. Each time a Red Sox player hits the emblem and subsequently reaches base, IBEW Local No. 103 will donate Red Sox game tickets and $250 to local charitable organizations that support young people in the Greater Boston area. In addition, through the partnership with Local No. 103 and NECA, youth who attend games as part of the Red Sox "Bullpen Buddies Night" will receive special hospitality and recognition during the games.

IBEW Local No. 103 is also the sponsor of the Boston Red Sox's baseball equipment drive, which benefits Major League Baseball's "Baseball Tomorrow Fund." Under this program, members of the community can drop off new or used baseball equipment at Fenway Park or the Local No. 103 union hall at designated times. The equipment is then donated or repurposed for use by a number of community organizations, such as baseball and softball leagues that focus on underserved youth and communities in the Boston area.

"On Friday night, June 22, our business manager and I actually threw out the first pitch at the game," said Glenn Kingsbury, executive manager for Boston Chapter NECA. "And on Saturday, we were part of the presentation ceremony related to the sports equipment drive for underprivileged children."

Local No. 103, NECA, and the Boston Red Sox are also now working together to promote and expand the "Helmets to Hardhats" program, which helps returning military service veterans find careers in the construction trade industries.

And, for fans of the game in general who attend Boston Red Sox games, Local No. 103 and NECA are in the process of installing new phone charging stations at various locations throughout the ballpark.

"We also have our logos on those," Kingsbury said.

"In addition, later in the season, we will be sponsoring the Mayor's Cup, when high from around the city have their annual tournament," he said.