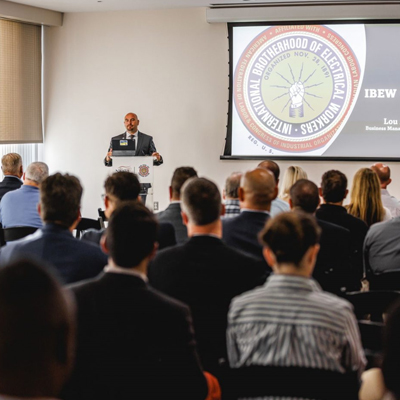 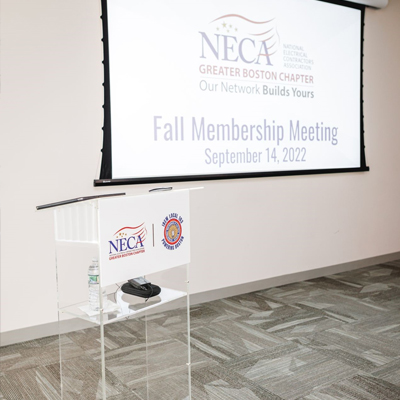 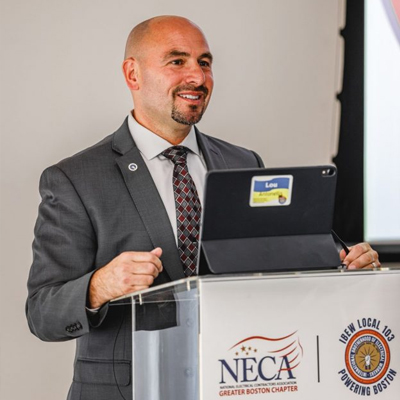 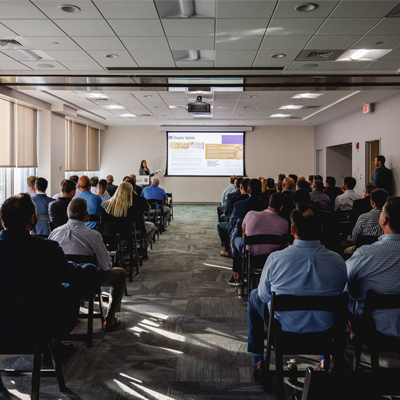 Last week, NECA Contractors welcomed the IBEW Local 103 Business Manager/Financial Secretary Lou Antonellis and his dedicated team to our NECA Fall Chapter Meeting. Antonellis hasn’t addressed the NECA membership since 2019 so the room was full and the energy was high.

When it comes to labor-management partnerships, we pride ourselves on setting the gold standard. Much of that progress and cooperation is a direct result of leadership and the work of his team. Business Manager Lou Antonellis has been a progressive leader for IBEW Local 103 and a strong partner to the NECA Contractors since taking the reins more than five years ago.

Under his leadership, IBEW Local 103 continues to experience tremendous growth, continues to cultivate a progressive reputation among elected officials and the business community alike, remains tenaciously committed with our DEI efforts in the industry, continues to pursue opportunities in new markets and remains strategic with our market recovery program.

We have accomplished a lot over the past five years. There is a lot of great work, new initiatives, political outreach and trailblazing efforts by IBEW Local 103 and for the IBEW and NECA Contractors. So, we were pleased to welcome Lou Antonellis to our Chapter Meeting to address the progress we have made as an industry and the work that remains ahead.

Antonellis, who has been a union member for 32 years, addressed the tremendous progress we have made together as an industry. “There’s nothing 103 wouldn’t do for NECA and NECA wouldn’t do for 103,” as he put it.

Read on to learn about Antonellis and Local 103 addressing future outlooks for the industry, impactful federal policies resulting in jobs for the electrical construction industry, important DEI initiatives, and the work that remains ahead.

Local 103 swore in the largest and most diverse apprenticeship class in the union’s history in June. 51 percent of the 375 graduates were women or people of color. “It’s not by accident we’re getting those applicants, it’s intentional,” Antonellis said. “We’re working hard to recruit women and people of color and together we must ensure their success.”

Increasing diversity in a traditionally male-dominated trade is the right and inclusive thing to do, requirements notwithstanding. But it also brings along other competitive advantages.

The building and construction market in Boston – ranging from institutions to customers - want diversity on their job sites, Antonellis said, “but not just a diverse workforce, they want diverse contractors.​”

NECA Boston alongside Local 103 are making great strides on both fronts – with new MWBE contractor members increasing in ranks and breaking into new markets.

One example is Outkast Electrical - a minority owned and operated electrical contractor from Dorchester. “[Founders] Paul & Kevin do mostly low to moderate income housing, a sector or our industry that we can’t get enough contractors to bid,” Antonellis said.

​Another recently signed contractor, Annese Electrical, is an 35-year-old 80+ employee, women-owned and operated Electrical contractor from Weymouth. As “bonified public work contractors” they have seen enormous success breaking into that sector.

Recovering from the Pandemic and Maintaining Forward Success

Despite concerns of real estate softening from record highs, coupled with high interest rates and inflation, “we are projecting 2023 – 2024 to be very solid years,” Antonellis said, citing Boston’s building boom, especially in the biotech space, coupled with the massive influx of infrastructure funding from the Biden Administration.

As Lou concluded, “we can’t predict the future” – but NECA Boston looks forward to a continued successful partnership with IBEW Local 103 as we use our network to build the success of our members, and an inclusive city and community.